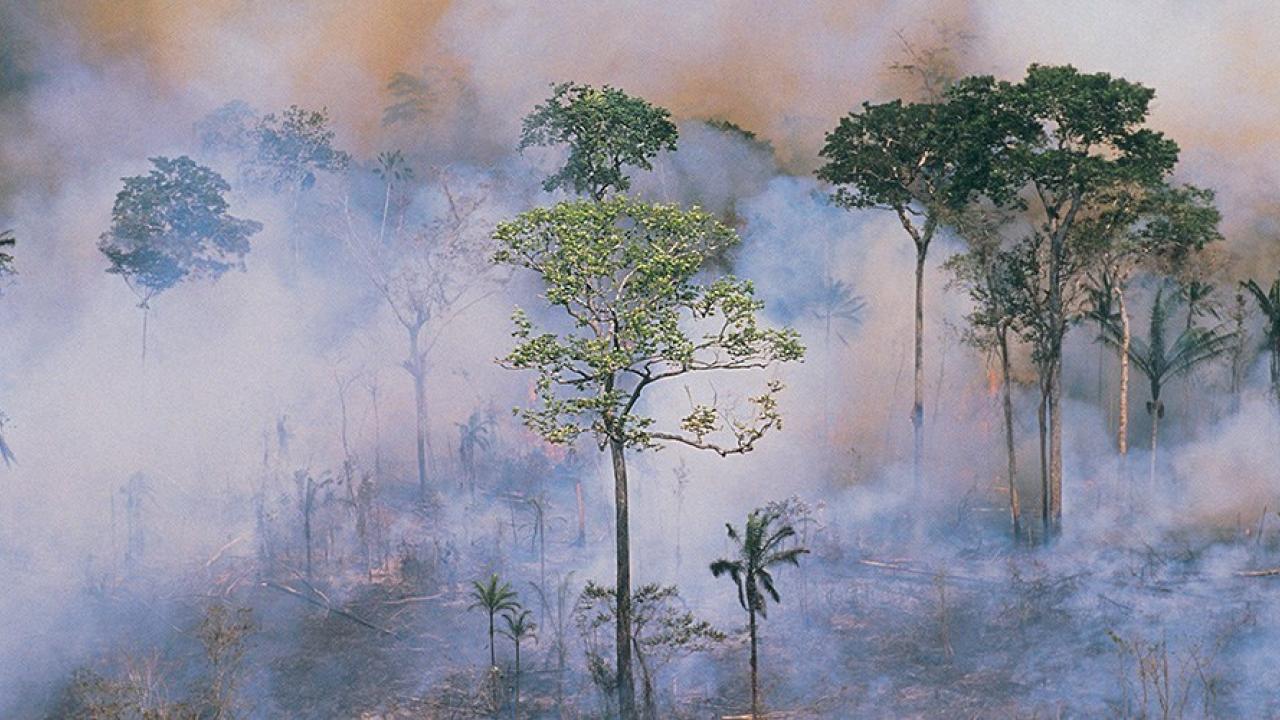 Australia’s Wildfires in a California Context

So far, Australia’s wildfires have burned more than 25 million acres and killed 25 people and an estimated (and staggering) 1 billion animals.

Malcolm North, a forest ecologist with the USDA Forest Service and an affiliate researcher in the Plant Sciences department at UC Davis, has been one of our go-to experts related to wildfires in the West. So we asked for his help putting Australia’s wildfires into a California context and describing what the two regions can learn from each other.

What goes through your mind as you see news reports and images of the current wildfires in Australia?

Well, I’m much more familiar with California’s problems, but what struck me most is it’s a really horrific amount of fire. The stats in terms of the area being burned relative to the area in the U.S. is mind boggling. New South Wales alone has over 5 million hectares of wildfire. It takes California several years to get up to that level.

Does Australia have a history of forest fire suppression like we do in the U.S.?

They have had suppression efforts. There was a push back in the 1980s and ’90s to acknowledge how much the aboriginal culture had put fire into the system. There’s been more fire used in the landscape there than in the U.S., particularly in the areas around Perth.

Vegetation in the burn areas are mostly jarrah and eucalyptus forest and shrubs. Much like our oak woodland and chaparral ecosystems, it is built to burn. Fire suppression alone is not what’s driving the problem. Fuels treatments don’t do much good in those systems. It’s the same problems we have in California with the fires that destroy a lot of structures.

To put it simply, California has at least two main fire regimes, which I think people forget: One is the forest, which is fuel-loaded from suppression, so fuel treatments can help. But the other regime is the lower elevation, oak woodland/chaparral, in which fuel-reduction treatments don’t do you a bit of good.

What role does climate change play in these fires?

Some of the problems with the Camp Fire and Northern California fires that have been so disastrous certainly have a climate weather signal. We’ve known this pattern in Southern California, where autumn fires in chaparral systems are the norm. What’s changed is you now have those conditions in central and northern California happening when in the past you would have had precipitation during the high wind season, taking fires off the table.

The Camp Fire burned in December, when it normally would have been too wet to go anywhere. That combination of hot dry winds and increased human-caused ignitions is very analogous to the fire situation in much of Australia.

What’s driving this bad fire event for most fires in Australia is really extreme weather conditions. The Indian Ocean Dipole is stronger than it’s been in 60 years. That’s where the western side of the Indian Ocean is hotter than normal, and the eastern side is cooler, which tends to make conditions much warmer and drier. I think Australia is experiencing one of the most extreme drought and highest temperatures ever recorded, and it’s a deadly combination.

What lessons do you think Australia and California can learn from each other?

Australia is really the closest analog we have to many parts of the western United States. There’s a lot of information and exchange between the two countries, and it hasn’t moved the needle too much in either location, but there’s always hope.

What they’re experiencing is unfortunately a likely scenario for what we’ll see more and more of in the coastal areas and northern parts of California that are dominated by oak woodland and chaparral. The fuels and weather conditions we have are exactly the same as in many of Australia’s problem-fire areas.

One thing Californians could learn from Australia is to stress the need for the individual to take care of their home and its surroundings. That’s one of the most important things we can do to maintain structures. Frankly, there’s no better way to prevent wildfire from burning your home than putting fire [treatments] back onto your land. Goats, herbicides, mechanical treatments, you name it — none of them come close to what fire can do.

I don’t think Australia has the same requirements for flammable building codes that we have, which went into effect in 2008. Recognizing the importance of and encouraging the use of fire-resistant building materials might be helpful in Australia. They also don’t have as highly a centralized and coordinated firefighting system as we do. When you get something of this magnitude, it’s hard to coordinate, which is why Australia brought military in to deal with evacuations.

Globally, what other regions appear to be primed for fires of this magnitude?

There are five Mediterranean climate regions in the word. All are seasonally drought-prone systems with vegetation primed to burn: Parts of Chile, Western Australia, the tip of South Africa, the Mediterranean, and California. They have always had problems with fire. I think eventually we’ll get to a tipping point where more difficult places to burn, like the Pacific Northwest, will experience dry enough conditions that we start to see more large, high-severity fires in these forests. People talk about the Amazon as reaching that tipping point. I would want to start watching those places.

[UC Berkeley fire scientist] Scott Stephens invited Australian fire ecologists and managers here, and we had several meetings to find out how they were so successful at putting fire back into the Western Australia landscape. They were blunt, pointing out “We’re not nearly as litigious as you are in the U.S., so managers are more comfortable using fire.”

But the other thing they pointed out, which is what I’m hopeful for, is that if you can build a network of anchors in the landscape — places where you’ve used fire or thinning to reduce fuels — it becomes much easier to contain a fire. Western Australia’s land managers burn 1 to 1.5 million acres each year. In the western U.S., we’d love to get even half of that.

If we ever get serious about using fire in these places where fuels reductions really matter, and making greater use of managed, beneficial fire, there is some hope we could turn that corner.

(Kat Kerlin is an environmental science writer and media relations specialist at UC Davis. She’s the editor of the Science & Climate website and its “What Can I Do About Climate Change?” blog. @UCDavis_Kerlin

This article was first posted on the Science & Climate website.)

Additional news on fire and wildfires, posted in Plant Sciences