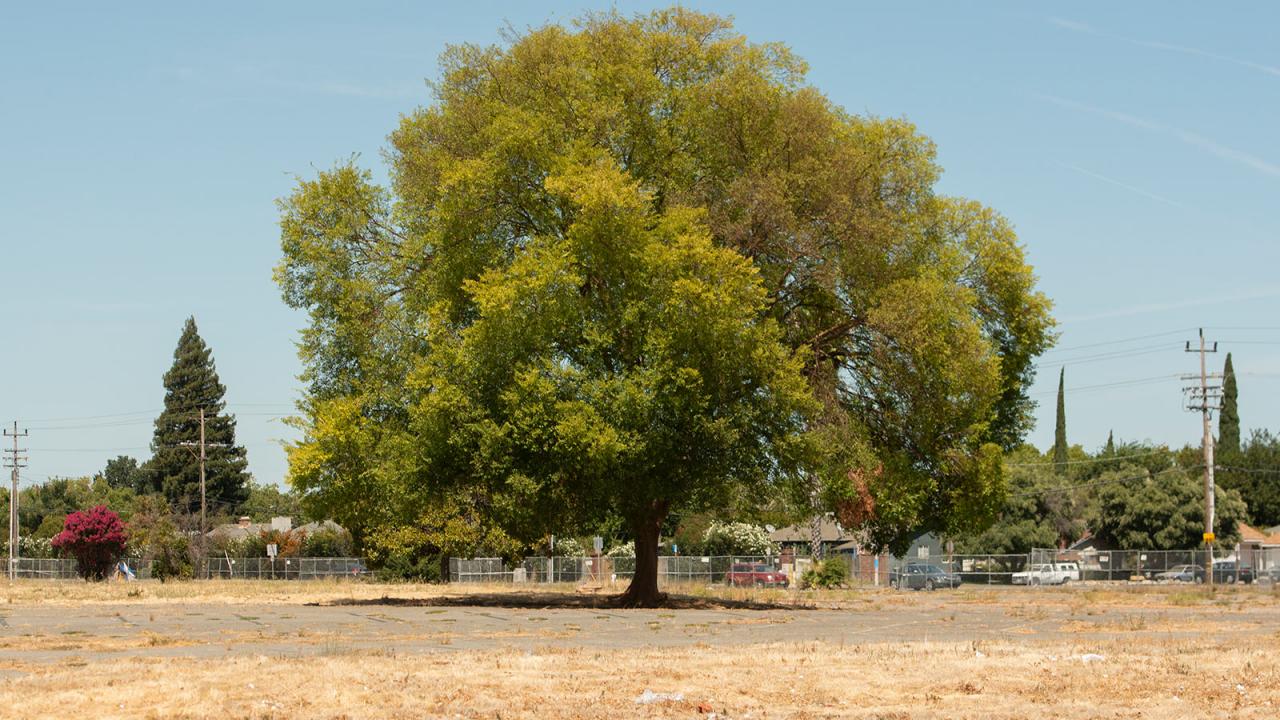 Beyond Beautification, Trees Are a Health and Climate Justice Solution

A tree sits in the middle of a big empty lot in South Sacramento. It is huge and leafy, its arms open wide, an arc of green swooping across a hot summer sky. Fenced off in this abandoned car lot, the tree is a bold sign of life in an otherwise barren expanse of dirt and busted concrete. It’s a wonder that it’s still here.

This old lot looms large for Victoria Vasquez. Her dad used to live a half mile from this spot.

“I feel so bad that at the end of his life, this is what he had to see every day,” she said. “The people here deserve better.”

Vasquez is taking me on a driving tour of the city’s tree canopy. We started in Land Park, where people push baby strollers and jog around lakes on a tree-lined path. The tree canopy here covers more than 40 percent of the land.

A few blocks later, we entered South Sacramento. The landscape shifted dramatically from brick bungalows, lush lawns and shady lanes to hardscape, weeds and chain-link fences. Tree canopy here is only 12 percent. This is the neighborhood Vasquez serves as a Sacramento Tree Foundation NeighborWoods organizer, a program funded by Cal Fire and California Climate Investment.

“We know we have issues with the urban heat island,” Vasquez said, sitting outside the empty car lot. “This is a disgrace.”

Urban heat islands are areas with very few trees, very little shade and a built environment that soaks up heat and releases it into the air. Trees can help make cities more livable as temperatures rise under climate change. Their presence can cool a neighborhood by as much as 10 degrees.

In Sacramento as in many other metro areas, urban heat islands often coincide with the most impoverished neighborhoods. An Arizona State University study found that for every $10,000 increase in a neighborhood’s average household income, the local temperature drops half a degree.

UC Davis urban ecologist Mary Cadenasso saw this with her research about Baltimore, Maryland, where she studied how temperatures and heat islands vary with social factors such as poverty.

“There are still huge temperature differences by people in the city based on where they live,” said Cadenasso, a professor in the Department of Plant Sciences. “How are pavement, vegetation and buildings distributed? Who lives in areas with greater tree canopy versus little tree canopy? That has a big impact on human comfort.”

Trees can also impact the pocketbook: A well-sited tree shading a home can reduce cooling costs by as much as 40 percent.

Cadenasso said it’s also critical to recognize that nighttime air temperatures have been increasing in Sacramento over time, and cooling Delta breezes have been declining.

“This particular change will have a dramatic effect on human health and really expose inequities in our populations that can’t avoid that heat through air conditioning and whose neighborhoods may not feel safe enough to leave windows open,” said Cadenasso.

Neighborhoods in urban heat islands also tend to have health disparities compared to communities with more trees. These include higher rates of asthma, obesity, diabetes and among the lowest life expectancy rates, making trees a social and climate justice issue.

“We have to stop thinking of trees as ‘beautification’ and more as a public health solution,” Vasquez said.

A right to trees

There are many ways the communities I work in are underserved; trees are just one of them.
– Victoria Vasquez

In partnership with the Sacramento Metropolitan Utility District, or SMUD, the Sacramento Tree Foundation offers free trees to residents, schools, churches and businesses. They help plant them, offering equipment, training and advice on the right tree in the right place to provide the most benefit. Vasquez said a big part of her job is simply letting people know they have a right to the same numbers of trees found in wealthier neighborhoods.

“Convincing people they can have the help they deserve is what I do,” Vasquez said. “There are many ways the communities I work in are underserved; trees are just one of them.”

She runs into some common challenges: People who rent their homes may be less invested in planting trees or are unsure of how to approach their landlord about adding trees. Some landlords are not well connected to the land or community to give planting trees much thought or are wary of tree maintenance. Some even remove outdoor water spigots to deter use by homeless people, which removes the possibility of tree planting. Other people are simply unaware of existing opportunities for free trees and expertise. And while the drought and city water restrictions have ended, some residents still fear being fined for overwatering.

But there are also success stories — like the two brothers who own some South Sacramento apartment units and have lined their neighborhood with trees. Or the school whose tree planting sparked a wave of campus pride, including a new school garden and trash cleanups.

“Our parks in Sacramento are so heavily used, more so than any urban area I’ve been to,” Cadenasso said. “I think that’s because of our shade. Shade works here.”

Cadenasso is researching tradeoffs between water conservation, trees and green spaces in Sacramento. She explains that trees can cool the system in two ways: by blocking incoming radiation from the sun so less heat is absorbed, and through transpiration, where trees lose water when their leaves are photosynthesizing.

She also notes that shade doesn’t have to be green. We can creatively use hardscapes, pointing to the bustling Sacramento Downtown Farmers Market being held under a rumbling freeway as one example. Things like cool roofs and cool pavements can be integrated into the built environment to reduce heat absorption. Even simple solutions like painting homes and buildings in a light color can make a difference.

As for increasing greenery, there are water-wise ways to do so. Many warming cities are looking to increase their urban tree canopy. Even hot, dry Phoenix is halfway toward its goal of 25 percent tree canopy by 2030, using desert-loving trees such as palo verde, elm, desert willow, pine and others.

Sacramento has additional opportunities to increase its canopy, which is currently 20 percent, when the city updates its Urban Forest Master Plan next year.

Our parks in Sacramento are so heavily used, more so than any urban area I’ve been to. I think that’s because of our shade. Shade works here.
– Mary Cadenasso

Shelley Jiang works with the Sacramento Metropolitan Air Quality Management District’s climate change mitigation and adaption programs. She is leading a project to model the urban heat island effect for the Sacramento region in partnership with Haider Taha of atmospheric modeling company Altostratus. Preliminary work shows how heat generated in Sacramento gets pushed into the foothills around us, moved along by the Delta breeze.

“For us, it’s a regional issue we have to address together,” Jiang said. “These outlying jurisdictions that view themselves as surrounded by greenery are exposed to heat beyond what they would normally receive.”

“I think a lot of people think that excess heat is just a given,” Ave said. “But this is heat we’ve created ourselves; there’s nothing natural about that. You can definitely take active steps to reverse that and make the region more livable.”

Urban heat islands can create patches of excessive heat due to the built environment, but trees can help reduce temperatures and increase health and community well-being. Planting vegetation in bare medians can help. There could be water conservation tradeoffs, so drought-tolerant options and strategic watering are important. Cool pavements and cool roofs can also lower the city’s temperature. And if we want people to use public transportation — be it buses or bike paths — they need to be shaded.

This article is the third in a series that discusses Sacramento’s hotter future, and what we can do now to be ready for it. The article was written by Kat Kerlin, UC Davis, and originally posted here. The featured image at the top is by Gregory Urquiaga, UC Davis.