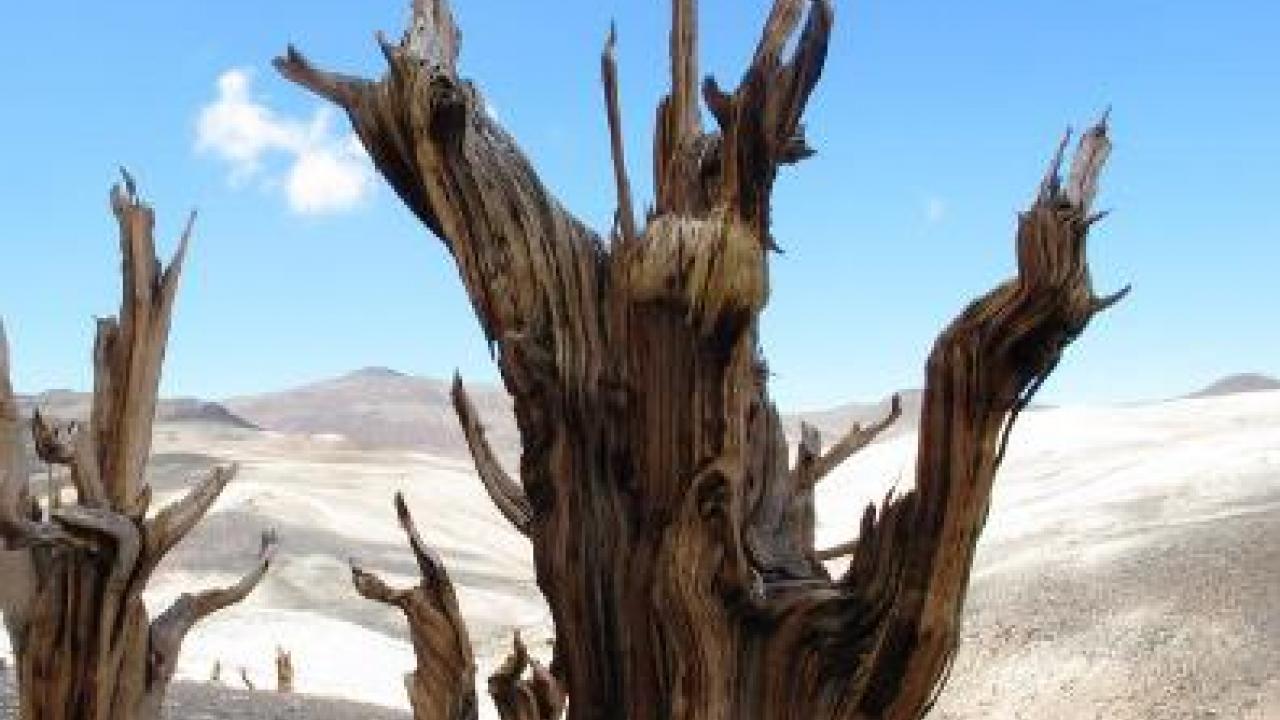 Gnarled, dead bristlecone pine trees, which can live more than 5,000 years, stand where young limber pine grow around them. Limber pine is beginning to colonize areas of the Great Basin once dominated by bristlecones. (photo: Brian Smithers/UC Davis)

Bristlecone pine and limber pine trees in the Great Basin region are like two very gnarled, old men in a slow-motion race up the mountaintop, and climate change is the starting gun, according to a study from the University of California, Davis. 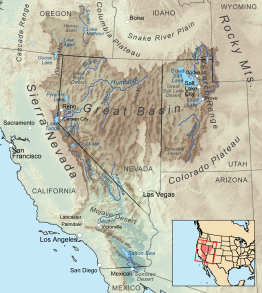 The study, published in the journal Global Change Biology, shows that the tree line has been steadily moving upslope over the past 50 years in the Great Basin. The region extends from California's Sierra Nevada, across Nevada to Utah's Uinta Mountains. Its north and south are framed by the Columbia and Colorado rivers' watersheds.

"We are seeing very little regeneration anywhere in bristlecone ranges except in the tree line and, there, limber pine is taking all the good spots," said the study's corresponding author Brian Smithers, a Ph.D. candidate in the Department of Plant Sciences at UC Davis. "It's jarring because limber pine is a species you normally see further downslope, not at tree line. So it's very odd to see it charging upslope and not see bristlecone charging upslope ahead of limber pine, or at least with it."

The study concludes that if bristlecone pine trees are unable to advance upslope because they are blocked by limber pine, bristlecones could face a reduction of their range and possibly local extinctions. 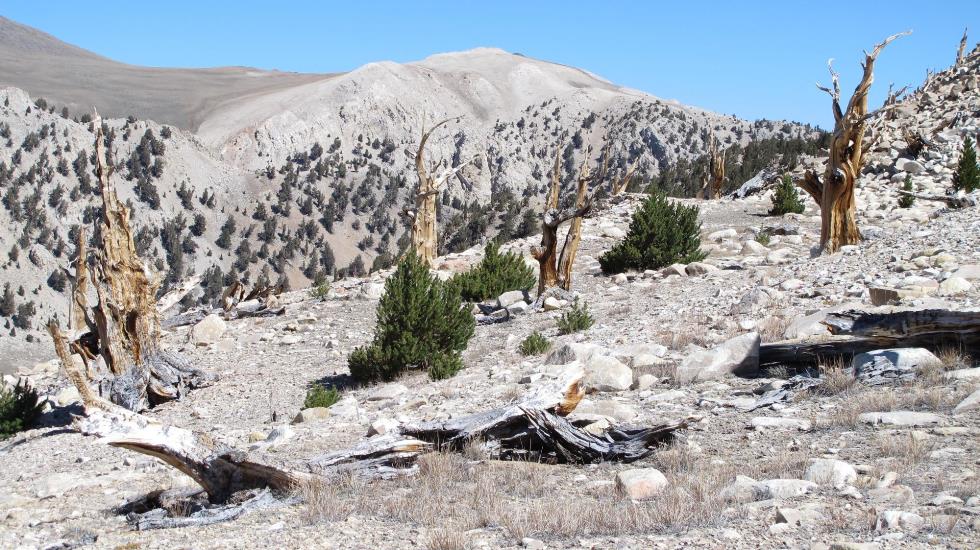 Dead bristlecone pines stand among limber pine trees on the California side of the White Mountains, part of the Great Basin region. (photo: Brian Smithers/UC Davis)

Bristlecone pine trees are Earth's oldest individual trees and can live for more than 5,000 years. No spring chicken, limber pine trees can live 2,000 years or more.

Both tree species have seen many climate changes during their time on Earth -- from extremely warm periods to ice ages -- and have slowly advanced across the landscape. Over millennia, bristlecone pine trees have moved from the lowlands of the Great Basin up to the current tree line. But, the study notes, neither bristlecone nor limber pine have ever experienced climate change and temperature increases as rapidly as what has been occurring in recent decades. 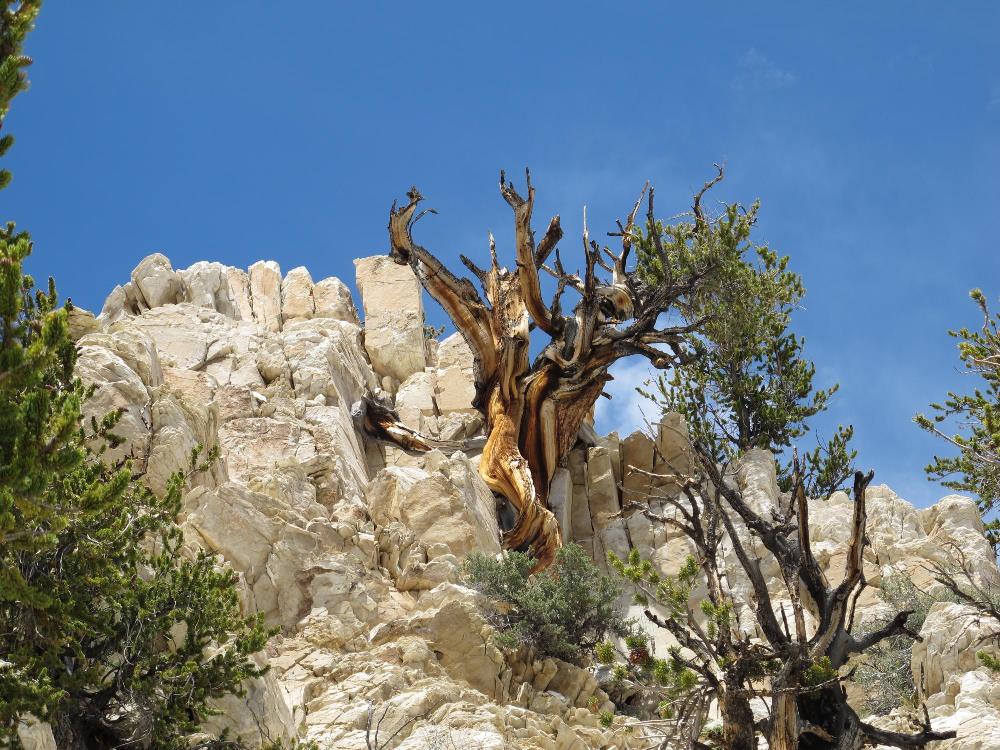 Bristlecone pine trees grow on soils and in conditions where few other species can live. But limber pines in the Great Basin region, such as California's White Mountains, are beginning to give them some competition. (photo: Brian Smithers/UC Davis)

Smithers said he doesn't expect bristlecone pine adult trees to be impacted much by current climatic shifts, as those trees are well-established. But how, if and where new bristlecone pine trees will regenerate is less certain, particularly as other species like limber pine take up valuable space for them to germinate.

"The things we're doing today have legacy effects for thousands of years in the Great Basin," Smithers said. "When those trees do start to die, they won't likely be replaced because it's just too hot and dry."

The study suggests that land managers identify the specific bottlenecks for a species to live long enough to reproduce, and focus on that stage. For long-lived trees like bristlecone and limber pines, the bottleneck is at the time of their initial establishment, not hundreds and thousands of years into their adulthoods.