On April 12, 2017, UC Davis researchers announced in Nature Communications that they have unlocked a treasure-trove of genetic information about lettuce and related plants, releasing the first comprehensive genome assembly for lettuce and the huge Compositae plant family. 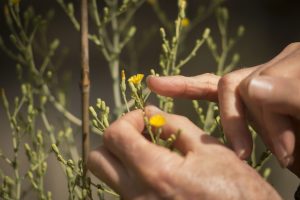 Lettuce belongs to a large Compositae family of plants. A lettuce flower shows the similarity to plants such as ragweed and sunflowers. (photo Gregory Urquiaga/UC Davis)

Garden lettuce, or Lactuca sativa, is the plant species that includes a salad bar's worth of lettuce types, ranging from iceberg to romaine. With an annual on-farm value of more than $2.4 billion, it is the most valuable fresh vegetable and one of the 10 most valuable crops, overall, in the United States.

Lettuce is a member of the huge Compositae family, which includes the good, the bad, and the ugly of the plant world, from the daisy and sunflower to ragweed and the dreaded star thistle.

The genome assembly -- a compilation of millions of DNA sequences into a useful genetic portrait -- provides researchers with a valuable tool for exploring Compositae family's many related plant species.

"This genome assembly provides the foundation for numerous further genetic, evolutionary and functional studies of this whole family of plants," said Sebastian Reyes Chin-Wo, the lead author and graduate student in the laboratory of plant geneticist Richard Michelmore.

"This is particularly significant because Compositae is the most successful family of flowering plants on earth in terms of the number of species and environments inhabited," said Richard Michelmore, who directs the UC Davis Genome Center and is a professor in the Department of Plant Sciences.

The researchers found that specific genes in the lettuce genome were consistent with certain physical traits -- like the production of a rubber-containing milky sap -- that have also been found in taxonomically distinct species, such as the rubber tree.

The study also provided evidence that somewhere during the evolution of lettuce about 45 million years ago, its genome was "triplicated." As a result, one-fourth of the genome appears in multiple related regions. Because such genomic duplications may give plant species an advantage in colonizing new environments, the ancient triplication event might, in part, explain the success of the Compositae plant family.

Michelmore noted that this is the first reported genome assembly of a plant species resulting from use of a new technology which gives information about the physical proximity of the DNA sequences to which proteins are bound.

The new approach, developed by Dovetail Genomics, a company spun out from UC Santa Cruz, resulted in a more contiguous and accurate genome assembly, even though lettuce has one of the larger plant genomes sequenced to date, he said.

The sequencing was done in collaboration with the genomics firm BGI. Funding was provided by 10 plant breeding companies through the Lettuce Genomics Sequencing Consortium, UC Davis Genome Center, National Science Foundation and U.S. Department of Agriculture.