A Little Water Stress Could be Good for Walnut Production

Taking a Byte Out of Big Data in Farming 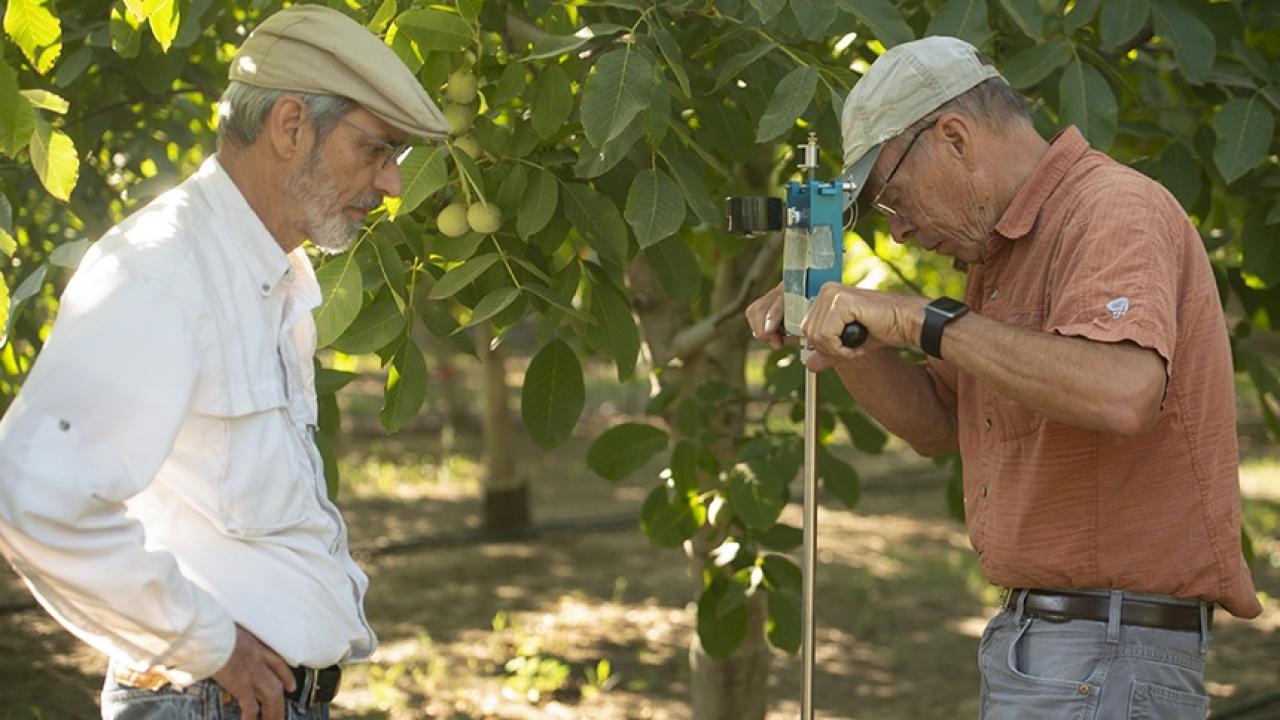 When it comes to watering walnuts, most California growers believe you need to start early to keep trees healthy and productive throughout the long, hot summer. But according to striking results from a long-term experiment in a walnut orchard in Red Bluff, California, growers can improve crop production if they hold off irrigation until later in the season and directly measure their trees’ water needs.

The findings from researchers at the University of California, Davis, may help farmers optimize water use.

“It’s a game-changer,” said walnut grower Hal Crain, who welcomed researchers onto his orchard to test irrigation optimization. “It’s clear to me you can improve nut quality and yield by applying water based on what the tree wants and needs, rather than just watering when it’s hot outside and the soil is dry. That’s a big deal for walnut growers and for the entire agricultural industry.”

Walnut grower Hal Crain photographed at the Crain ranch in Los Molinos. Crain is a second-generation farmer who is working with Cooperative Extension and UC Davis professors on a long-term experiment to study irrigation optimization. (photo Karin Higgins / UC Davis)

Crain is a second-generation farmer whose family has been growing walnuts in Butte and Tehama counties for 55 years. Like most walnut farmers, Crain had always started irrigating in early to mid-May, when the days grew warmer and the trees sprouted leaves.

“That’s standard practice for probably 90 percent of California’s walnut growers,” said Crain, walking amid his trees on a sunny afternoon. “The theory is that when you irrigate early, you preserve the deep moisture in the soil that trees need to survive the heat of summer.”

But that’s not how it works, the research shows. Instead, trees that grow in saturated soil early in the season don’t develop the deep roots they need to thrive.

“With all the water right there at the surface, the lower roots suffer,” explained Bruce Lampinen, Cooperative Extension orchard management specialist with the UC Davis Department of Plant Sciences. “Trees end up with a very shallow root system, which doesn’t serve them well as they try to extract moisture from the soil later on.”

Lampinen has long suspected that walnuts were getting too much water in the spring.

“A lot of the symptoms we see like yellowing leaves and various diseases can all be explained by overwatering,” said Lampinen.

So Lampinen did what scientists do: He set up an experiment. Five years ago, with funding from the California Walnut Board and the U.S. Department of Agriculture, he joined forces with Professor Ken Shackel, also in the Department of Plant Sciences at UC Davis, and Allan Fulton, an irrigation advisor with UC Cooperative Extension. Together, they led a team of scientists testing irrigation on Crain’s ranch.

When is the best time to irrigate?

Researchers say the trees hold the answer. Scientists use pressure chambers, which are air-pressure devices that measure a leaf or small shoot to gauge how hard the plant is working to pull moisture from the soil.

“Just because the soil looks dry doesn’t mean the plant is suffering,” said Shackel, who specializes in plant physiology. “Pressure chambers let you ask the tree how it’s feeling — sort of like taking a human’s blood pressure — which is a much more accurate way to measure a plant’s water needs.”

For the last five years, the team has been applying different water treatments to five blocks of trees. One block is getting standard, early irrigation. Crain’s orchard managers begin irrigating the other blocks when the trees reach different levels of water stress based on pressure-chamber readings.

The trees that experience moderate stress are doing the best. Their irrigation usually starts in mid-to-late June, several weeks later than when standard watering begins.

“You can tell just by looking at that block that the trees are healthier,” said Crain, standing beneath a canopy of lush, green trees. “And, we’re starting to see greater yields and better nut quality.”

The research is helping scientists advise farmers on irrigation.

“My biggest takeaway is knowing when to start watering is a really important factor to the health of your trees,” Lampinen says.

Pressure chambers — sometimes called pressure bombs — can cost more than $3,000, and high-tech versions are under development.

“I tell growers a pressure bomb would pay for itself even if you just used it once a year to determine when to start watering,” Lampinen said.

“When you irrigate based on your trees’ needs, you optimize water,” Crain says. “I’m not using less water overall, but the water I do use is producing more food. That’s good news for everyone.”