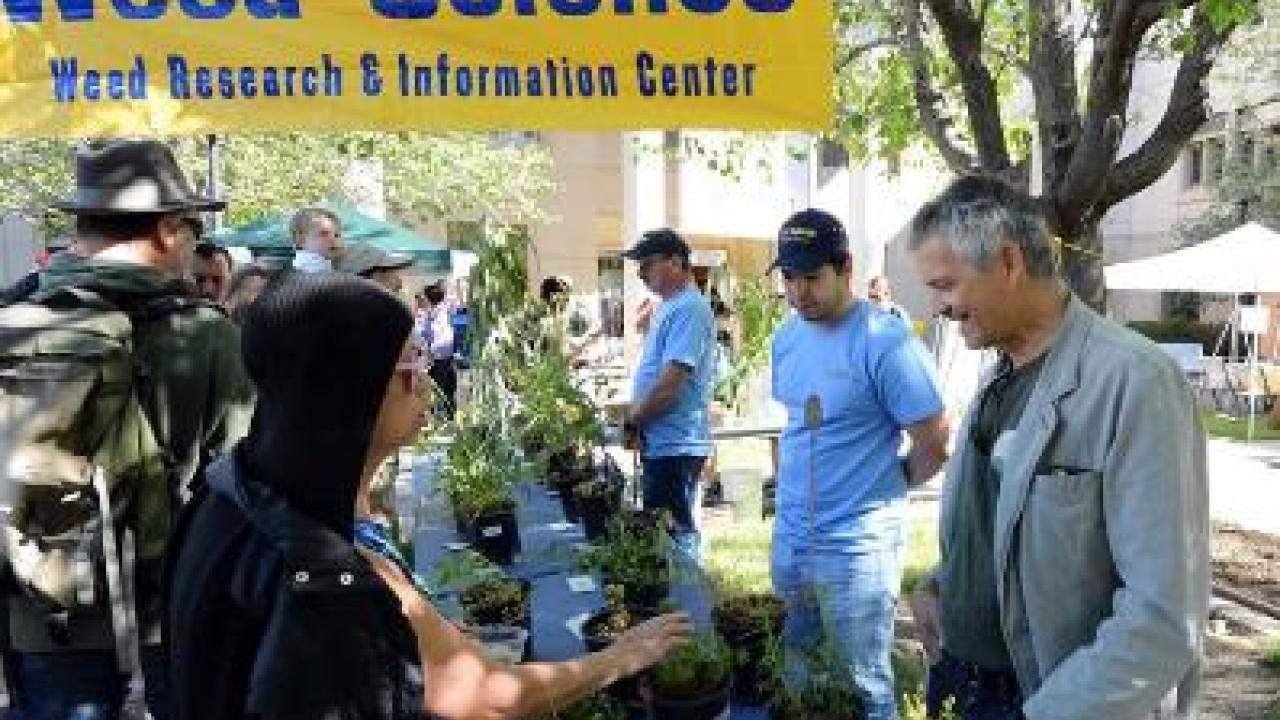 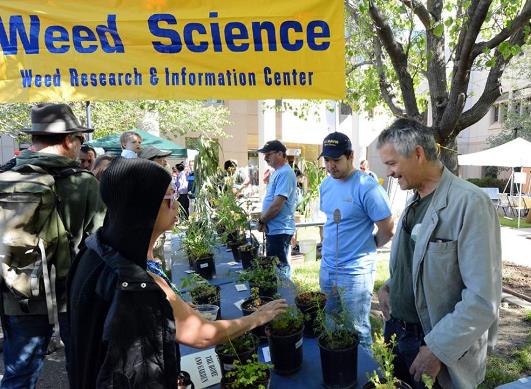 A month before Picnic Day every year, Plant Sciences staff research associate Guy Kyser prepares by driving around the campus's expansive fields looking for weeds -- but instead of trying to eradicate them, he's trying to save them.

Kyser is one of numerous faculty and staff who work behind the scenes of Picnic Day, creating exhibits, greeting community members and doling out expert advice. The weeds he collects become part of the "Weed Doctor" exhibit where community members can ask questions about unwanted plants in their yards.

When Kyser spots a weed, he uproots it and immediately gives it some water to stave off initial shock that can kill the weed, then does his best to keep it alive in a small pot until Picnic Day (about six from this year's collection died before the big day).

"If you take really good care of your weeds, sometimes they die. But they'll grow in a crack in the sidewalk," he said last Saturday while working as one of the "Weed Doctors."

Kyser said he can identify weeds while driving, but he doesn't have a specific "shopping list" of weeds in mind for the Picnic Day display. This year, he successfully preserved two varieties of filarees -- "a scoop," he said, because they often die when uprooted.

Other Plant Sciences faculty and staff handed out small tomato plants, answered questions about when to plant vegetables, and provided native seeds for people who wanted to restore their yards to a more natural state. People had lined up for the campus-grown Shady Lady tomato plants before the exhibit even opened; greenhouse manager Garry Pearson said the department usually runs out by mid-afternoon.

Plant Sciences professor emeritus Robert Norris retired in 2001 but continues to come to Picnic Day, giving advice about how to grow everything from house plants to fruit trees.

"For me, this university has been an absolutely phenomenal place to work," Norris said. "This is my giving back to society." 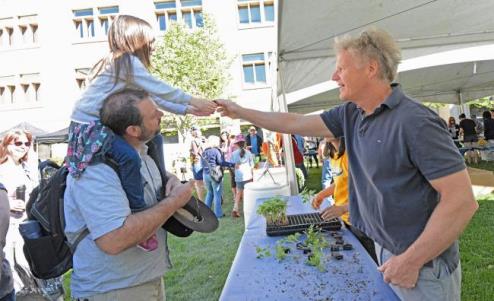 Paper Hats Bring a Department Together

Halfway across campus, preparation for the Department of Earth and Planetary Sciences' Picnic Day exhibit was also a month in the making. The department has handed out paper hats shaped like dinosaurs for more than two decades.

This year's dinosaur: the pterodactyl -- colorful wings and a head attached to a paper band. The entire department helped to make the 500 hats that sprawled across a table in the Earth and Physical Sciences Building.

"Staff in business meetings form an assembly line," senior artist Janice Fong said. "Faculty are cutting them on conference calls with other research institutions... I'm so impressed with our faculty, staff and graduate students -- the time they put into this."

And people were waiting Saturday for the door to open, Fong said.

Research assistant Alyssa Henry and her ninth-grade daughter, Marlena Billings, each wore a pterodactyl hat while handing them to others last Saturday. Henry recalled a senior who said he finally came early enough to get a dinosaur hat.

Of course, paper hats were not the only things on display at the department's Picnic Day exhibit. It showcased UC Davis' augmented reality sandbox and meteorites, and demonstrated natural selection in action by challenging people to pick up as many small, green beads as they could in 15 seconds. People found they were more successful when they grabbed the beads from a contrasting brown background than when they lay a bed of leafy greens.

"We give families something more than, Here's a fossil.' We're trying to teach them something about what we do," said Sandy Carlson, a professor of paleontology. "This forces us to explain to somebody who's not a geologist what we do."