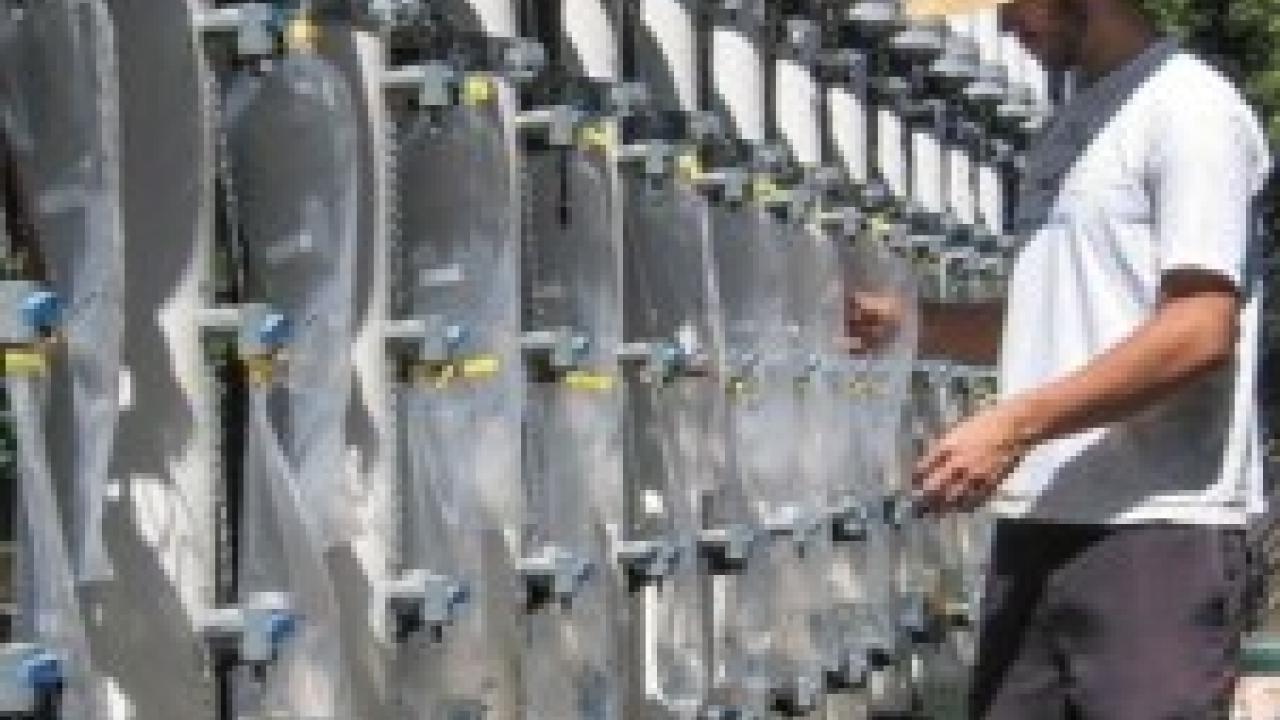 The successful attempt to rid water of tobacco mosaic virus expands the list of crop diseases that could potentially be managed using this relatively inexpensive method. 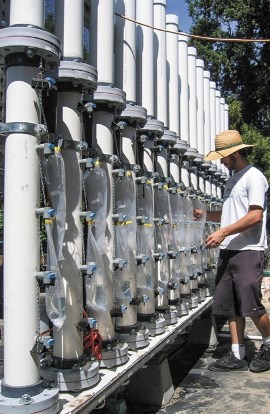 "The pathogens it has worked on so far are the water molds, and even fungi like fusarium," said Oki, UCCE specialist in landscape horticulture. "It worked to control fusarium, but eventually you get there. It's been used for hundreds of years for drinking water."

It can also remove nutrients and chemical pollutants, Oki said. Oki is a faculty member in the Department of Plant Sciences, UC Davis.

Oki, who showed three years ago that slow sand filters could remove Phytophthora from recirculating water, reported the first successful effort to use the method on viral pathogens in the summer issue of the University of California Nursery and Floriculture Alliance News.

Success controlling tobacco mosaic in irrigation water with slow sand filters might mean the method would also work with other crop disease pathogens.

"Tobacco mosaic virus is known to be a very robust virus that can survive for very long periods in a wide variety of conditions, and its removal means that the removal of other plant pathogenic viruses is likely," Oki said.

The entire summer issue of the Nursery and Floriculture Alliance News was devoted to studies and recommendations on sanitation as a tool to control crop diseases and pests.

Oki conducted his latest sand filtration research with UC Davis postdoctoral researcher Lloyd Nackley and UC Davis staff research associate Bruno Pitton. He emphasized the key to the method is the beneficial microbes that build up in the top six inches of the sand.

"Slow sand filters are an old technology that utilizes a microbial community to degrade contaminants in water, including plant pathogens," he said. "The uncleaned water passes through a bed of sand that serves as a substrate for the microbial community, allowing a biofilm to form around the sand grains. As the filter's microbial community matures, the surface of the sand bed becomes covered with a thick layer of microbes."

The microbes that work this magic on a long list of pathogens and pollutants remain a mystery.

"The exact treatment mechanisms are unclear," Oki said. "We don't know what the beneficial microbes are in the biofilm. We have a huge database on what is in it." 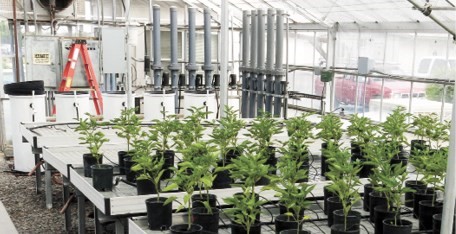 Anaheim peppers were used in the UC research project that monitors the effectiveness of sand filters in removing undesirable pathogens from irrigation water. (photo: Loren Oki)

Removing particles from the water first prevents clogging and reduces the need for maintenance of the sand filter.

There should be three feet of water above the sand to exert downward pressure, and the recommended depth of the sand filter is three feet, to allow removal of the top layer when it becomes restricted.

In order to allow the microbes time to do their work, the water must move slowly through the filter, but a 12-foot-diameter bed with three feet of sand is still enough to treat 10,000 gallons of water a day.

In Europe, some greenhouses have used the technique for a while, and one nursery in the United Kingdom has a sand filter large enough to treat 60,000 gallons a day. A research center in Germany constructed an enormous filter able to treat 350,000 gallons a day.

"The cost depends on the amount of water you need to treat," Oki said. "The initial costs are higher than UV treatment, but the operating costs are lower."

Suslow and Kosta confirmed in trials at both a warm-weather site in Winters and a cool-weather coastal site in Pacifica that solarization is an economical way to kill some disease pathogens in nursery containers before they are used again.

They placed leaf disks with Phytophthora cactorum inside one-gallon containers, some of them wrapped in clear plastic to increase the heat and others left unwrapped, and monitored the temperature.

"In lab studies, Phytophthora cactorum, as well as numerous other Phytophthora and Pythium species, can be killed at 120 degrees Fahrenheit for 30 minutes when exposed to moist heat," the researchers reported. "Reducing the temperature and extending time has proven to be just as effective at killing Phytophthora ramorum."

Phytophthora ramorum is the pathogen that causes sudden oak death, which is still of great concern in the ornamental sector.

Oki, Nackley and Pitton did their pilot study on killing viral pathogens at the UC South Coast Research and Extension Center in Irvine, on Anaheim variety pepper plants.

"Plant viruses, including tobacco mosaic virus, have been recovered from irrigation runoff, so their spread through the reuse of this water is highly likely," Oki said.

For the purposes of their small-scale study, water contaminated with tobacco mosaic pathogens was filtered through a four-inch-diameter PVC pipe filled with sand and then used to irrigate the peppers.