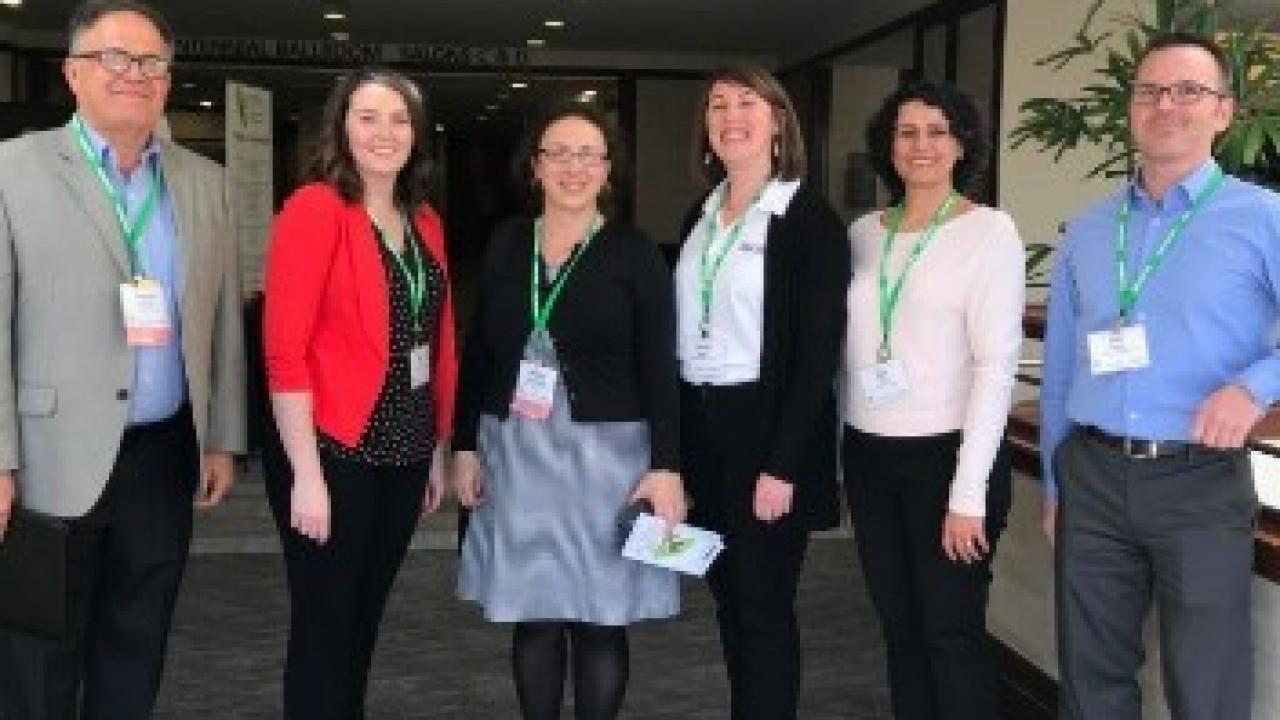 As spring quarter is well underway, the Kassim Al-Khatib Lab at UC Davis winds down from conference season. The students and staff in this lab are housed in the weed science unit under the larger plant sciences department. Many people do not realize how diversified the field of weed science is, and we ourselves sometimes get lost in agricultural research, that is until December, when we start preparing for our first conference in January.

This year, three graduate students -- Alex Ceseski, Katie Driver, and Liberty Galvin -- had the pleasure of attending the California Weed Science Society conference in Santa Barbara, California, at the end of January 2018. This was a great opportunity for university students because it provided direct access to opportunities within the state like networking with industry representatives, exposure to entrepreneurial private consultants, and a preview into current and upcoming research needs. The theme was "Restoration to Recreation," highlighting the various applications for this field. 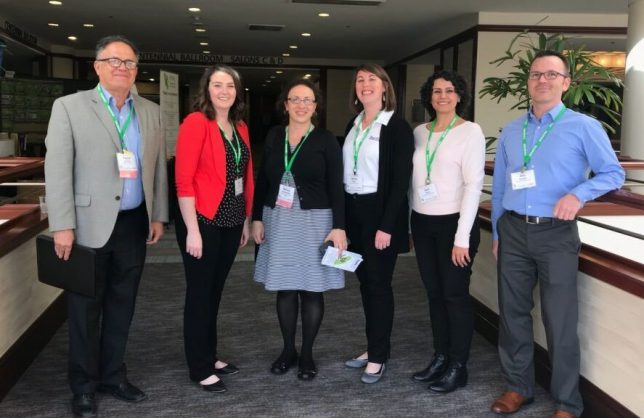 From left, Professor Kassim Al-Khatib, Katie Driver, Whitney Brim-DeForest, Liberty Galvin, Sara Ohadi, and Alex Ceseski. Brim-DeForest, a farm advisor in the rice-growing region of the Sacramento Valley, was a Ph.D. student in the Al-Khatib lab and now works closely with graduate students

Because UC Davis is an agriculturally minded university, people don't always realize that there are many applications outside agronomy that need a weed scientist. This was reflected in the presentations, ranging from controlling invasive grasses in costal range lands to best management practices to reduce worker and traveler exposure during roadside herbicide applications.

This conference is also especially appealing to students because of the monetary prizes given to both the poster and presentation winners. Katie feels that "attending conferences is an excellent opportunity to update pest control advisers, farm advisors, industry, and other academic scientists about your own research. These conferences are also a great way to network and learn and provide open doors for potential collaboration and feedback."

In the student competition, Katie Driver orally presented part of her dissertation research, "Survey of Bearded Sprangletop Response to Chlomazone in California Rice," and won first place. She also placed first in the poster competition with her research on determining if the same species of sprangletop had developed a flooding tolerance. This is very important because rice growers utilize flooding to help control many weeds.

Many people think weed scientists only deal with herbicides. Both Katie and Alex work with weeds found in rice crops; yes, their research does involve herbicides, but also flood management and precision tillage to help increase the techniques available to all rice growers.

Alex Ceseski said, "I became attracted to weed science as a means of improving yields through cultural methods. Weed control is a problem that all growers share; effective dissemination of cultural cropping practices (read: non-chemical control) may impact small growers more immediately," and allows for greater diversity from both a management perspective and a socio-economic perspective as well.

The second conference was the Rice Technical Working Group (RTWG) held in Long Beach at the end of February. If you haven't caught on by now, the Al-Khatib lab specializes in rice weeds. Katie enjoys "working in the rice weeds lab because rice is such an important crop, not only in the Sacramento Valley, but worldwide. Weeds are one of the biggest issues in rice production in California. Getting an opportunity to help advance the science and help growers along the way makes the work really enjoyable."

Rice systems are different from other grain production systems because of the water component. Depending on where you are in the world, rice is probably produced a little differently than in California. What makes California rice unique is that it is aerially seeded from a plane; in the Southern U.S. a drill is used to plant rice seeds into the soil. Despite these differences, Alex notes that "the analytical techniques that I am learning in California rice should allow me to be an effective extension advocate in rice anywhere in the world."

The RTWG was attended by the same three students, along with a postdoctoral fellow, Sara Ohadi, a new addition to the lab. Sara previously worked at Texas A&M and is now focusing her research on aquatic weeds, especially those that plague the California deltas and canals.

This is a unique conference held every other year that brings people together from across the globe to discuss current issues related to the entire rice value chain. The keynote speaker discussed mapping the genome of rice; another speaker talked about the importance of migratory birds in rice systems, and the ecosystem services they provide. Additionally, there were talks about reducing methane emissions to help reduce the impacts on climate change, as well as how weedy rice affects the economic returns on rice across the globe. Both Alex and Katie again participated in the student competition. Alex placed first in the poster competition with his smallflower umbrella sedge research, and Katie placed second in the Weed Control and Growth Regulation category with her oral presentation on bearded sprangletop. 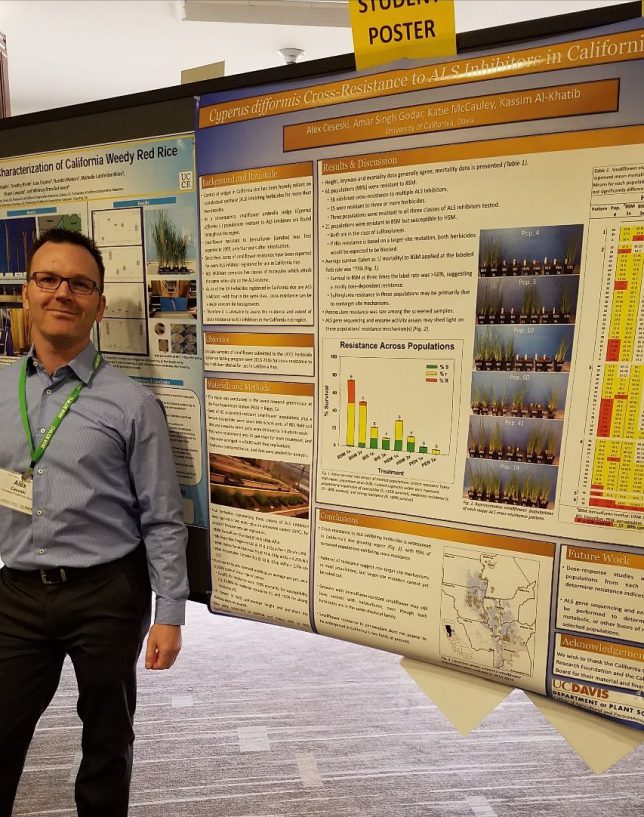 Last, but not least, at the Western Aquatic Plant Management Society (WAPMS) held in Reno, Nevada, March 26-28, Sara Ohadi from the Al-Khatib lab attended, due to her special emphasis in aquatic weeds. This was Sara's first time attending the WAPMS meeting. She came back with a lot of useful information about challenges and methods of managing aquatic weeds to protect waterbodies.

During the two-day conference, various topics including the biology and ecology of aquatic weeds, mapping aquatic plants by remote sensing, biological and mechanical control methods, as well as herbicide options were discussed. Overall, Sara enjoyed the conference and noted, "the take-home message for me was that even though there are few aquatic nuisance weeds, they can pose huge environmental and economic impacts if not managed."

The students thank Professor Kassim Al-Khatib for his support, both financially and socially, to attend these conferences. None of the students would have been able to attend without his assistance. 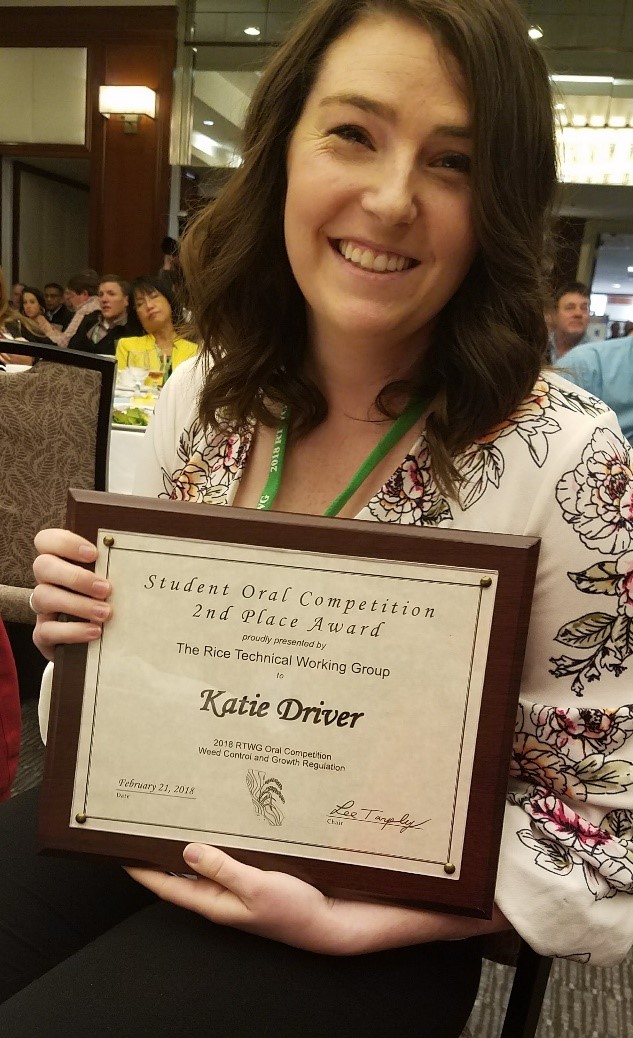 Katie Driver (UC Davis grad student) and her award for her research, "Survey of Bearded Sprangletop Response to Chlomazone in California Rice," at the Rice Technical Working Group Conference.

(Article written by Liberty Galvin and Sara Ohadi; both are members in the Al-Khatib Lab.)