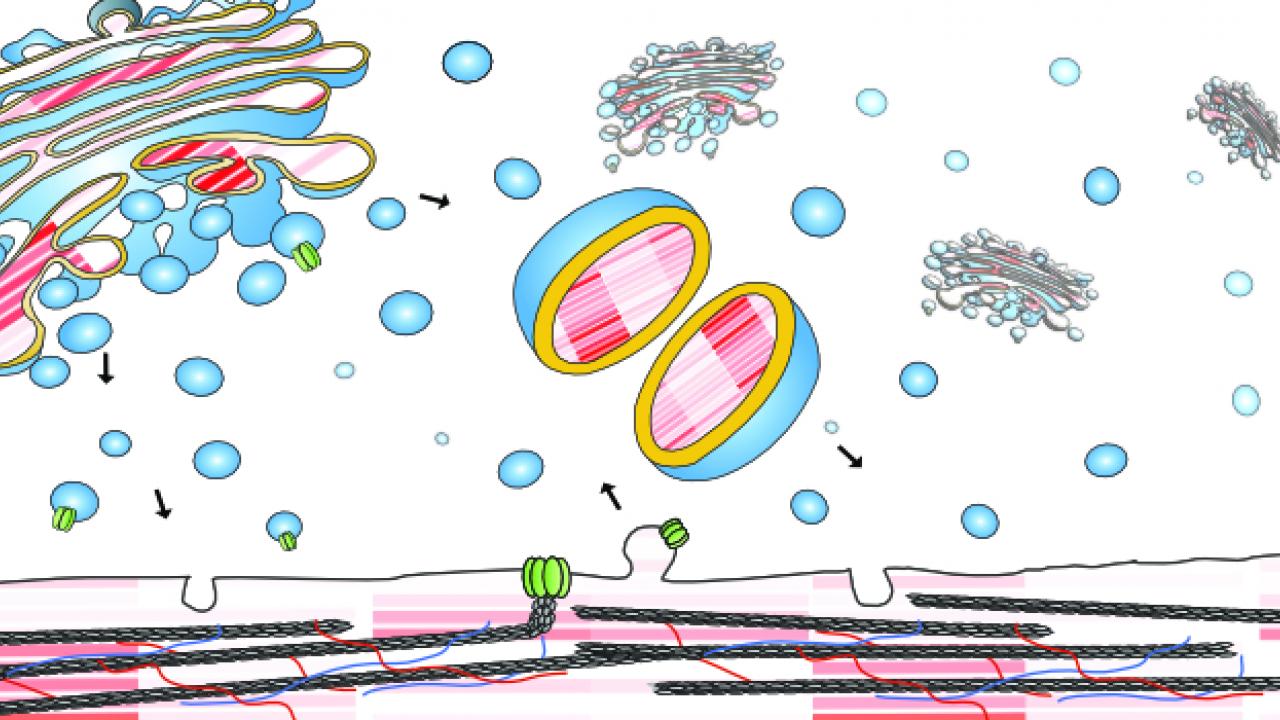 A Peek at the Polysaccharides Transported Inside Plant Vesicles

The cell wall is a complex and dynamic structure surrounding and protecting plant cells. Polysaccharides and glycoproteins are principal components of the cell wall. Within the plant cell, a network of membrane-enclosed compartments known as the endomembrane system, transports polysaccharides from their synthesis in Golgi apparatus, via vesicles, to build the cell wall.

Given the importance of the cell wall in plant development and response to the environment, a comprehensive understanding of the transport mechanisms used for its construction is of profound utility. Polysaccharide transport within plant cells is a research area in the lab of Professor Georgia Drakakaki, Department of Plant Sciences, UC Davis.

While many studies have identified protein cargo in endomembrane compartments, very little has been known about the endomembrane pathways that polysaccharides take. Made in the Golgi apparatus within plant cells, then assembled in the cell wall, the details of matrix polysaccharide (hemicelluloses, pectins and glycoproteins) transport between the Golgi apparatus and cell wall have been a mystery for decades. This is partly due to the significant challenges in isolating vesicles and determining their polysaccharide cargo.

In a recent publication in The Plant Cell, Wilkop et al. investigated the glycan contents of specific subsets of vesicles, to begin to understand how the construction of the plant cell wall is regulated by environmental and developmental cues.

The team developed an elegant combination of vesicle isolation and glycomics. Plant vesicles were isolated through a bait protein, present on their surface, and the vesicle glycome was interrogated with an array of carbohydrate-specific monoclonal antibodies.

This study gave an unprecedented view of the structure of wall polysaccharides while they are still in the endomembrane system prior to their deposition in the apoplast.

“By isolating vesicles, we were able to detect the polysaccharides within. This is the first time anyone has been able to determine the types of sugar polymers carried through the plant endomembrane system by vesicles,” said Drakakaki.

From this data, many hypotheses can be made on the biosynthesis of matrix polysaccharides in the endomembrane system and how they are modified after being deposited in the cell wall, in particular how plant cell wall polymer structure and metabolism change during plant development, and as a response to environmental stimuli.

With this knowledge, it is possible to design strategies for desirable cell wall characteristics towards improving plant nutritional value, biomass production, resistance to pathogens, and ability to cope with climate change.

This approach is applicable not only to plant systems but to the overall scientific community. The research article received Faculty of 1000 Recommendations.

Could Vines Be the Answer to Speeding Urban Cooling, Water Reduction in the West?