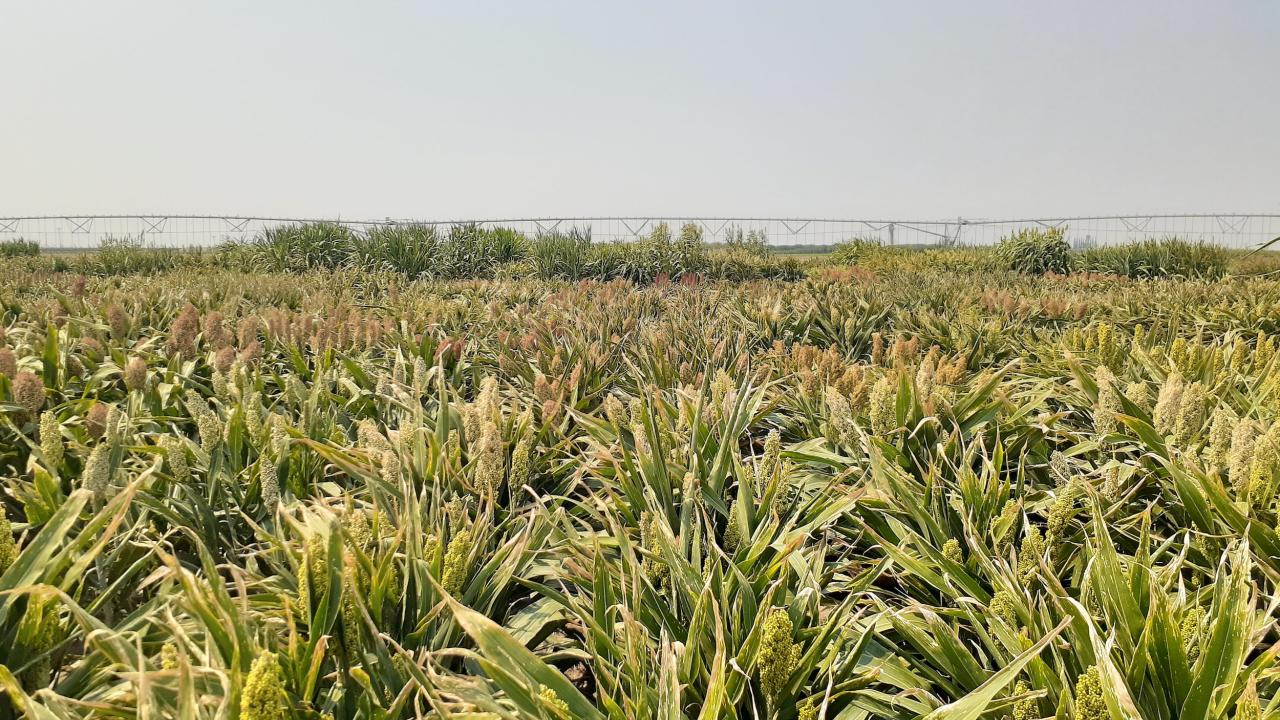 The international project will focus on productivity and nutritional quality

Sorghum is an earthy, nutty, gluten-free grain that boasts remarkable drought tolerance. It also poses serious potential as a sustainable crop in a warming world.

To enhance the productivity and nutritional quality of grain sorghum, in both optimal and pre-flowering drought conditions, the National Institute of Food and Agriculture has awarded $650,000 to Christine Diepenbrock, an assistant professor in the Department of Plant Sciences at the University of California, Davis, and Julia Sibiya, an associate professor of plant breeding at the University of KwaZulu-Natal in South Africa. The funding is part of NIFA’s Agriculture and Food Research Initiative, which is within the Plant Breeding for Agricultural Production program area.

“With its resiliency and low irrigation needs, grain sorghum is a very promising crop in current and future climates,” Diepenbrock said. “Genomic resources for sorghum have also grown considerably, which can inform and help accelerate the progress that we make through plant breeding efforts.”

To be clear, grain sorghum produces grain that can be part of human diets, whether in traditional porridges or as a whole grain flour for bread making. It is different from forage, biomass, and sweet sorghum varieties, which are produced for silage, bioenergy, and sweeteners, respectively. However, grain sorghum may also be used as forage or as a feedstock for biofuels.

On the project, Diepenbrock will work closely with Julia Sibiya, the project’s co-director and an accomplished breeder of sorghum at the University of KwaZulu-Natal and African Centre for Crop Improvement in South Africa. Together, they will work on the development and implementation of genomics-assisted strategies – like using DNA sequence information in predictive models and/or breeding decisions – for the improvement of grain sorghum.

“We are specifically interested in the effect of pre-flowering drought stress—that is, stress taking place before the crop flowers—on the final number of grains produced by each of these hundreds of sorghum cultivars,” Diepenbrock said. “This type of drought stress takes place during a critical time in the season for determination of the number of grains, which, along with the size and weight of the grains, can be important in determining the crop’s final yield level.”

To fully understand these many elements, the researchers will employ multiple types of modeling. One such model will track the growth patterns of various sorghum cultivars from seed to harvest on a computer so as to build an understanding of sorghum’s productivity and macronutrient composition (think protein, fat, and starch), as well as the roles that genetic, environmental, and management factors play in their development

Phenotyping – the assessment of certain crop characteristics, such as plant height and grain color – will also be important in the team’s understanding of productivity and nutritional quality in grain sorghum. Rebecca Dumanski, a Ph.D. candidate in the Plant Biology Graduate Group at UC Davis, will work with the team to phenotype thousands of sorghum samples collected from the California field sites. Using this information, the team will dissect the genetic basis of and develop predictive models for priority traits in sorghum in well-watered and drought conditions.

Following the collection of data and various model outcomes, the team will identify and generate information to develop sorghum inbreds and hybrids that have enhanced quality and/or productivity under both optimal and water-limited conditions, or in just one of these environmental conditions. The team also aims to help develop new female parents for the diversification of sorghum breeding programs in the United States.

Currently, the United States produces the most grain sorghum of any country in the world. Yet it tends to be a very uncommon food item for people living in the U.S., unless they live gluten-free. The team recognizes that consumer preference, particularly in the U.S., could be a challenge down the road, even in the face of sorghum’s potential as a climate-resilient crop.

With this project, Diepenbrock and her team are seeking to develop grain sorghum to be a more desirable, a more nutritious, and even a more sustainable crop.

"This is a really exciting international project to work on,” Dumanski said. “Due to the wide distribution of grain sorghum, this project doesn’t benefit just the U.S., but the world in a very tangible way.”

Matt Marcure is the media communications specialist for the Department of Plant Sciences. He can be reached by email or phone, (530) 601-6846.

Christine Diepenbrock is an assistant professor in the Department of Plant Sciences. She may be reached by email.