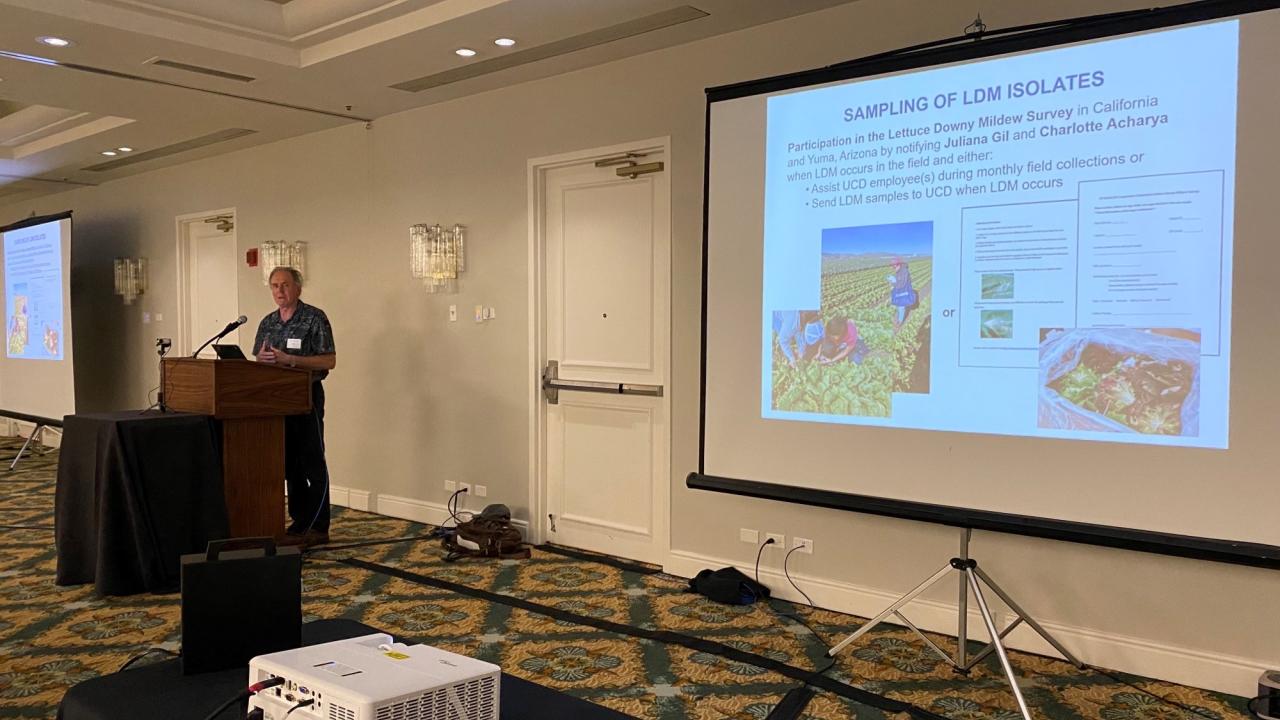 As common crop diseases such as downy mildew, Fusarium and corky root evolve, Richard Michelmore and members of his lab look for the genetic basis of new variations and for genes in lettuce that can resist them. They hope to breed those qualities into existing cultivars that already stand up to multiple diseases.

Resistance to fungicides that combat downy mildew is a constant worry to growers. If mildew problems have persisted after applying Revus, Orondis or Forum in the correct, manufacturer-specified amounts and manner, Michelmore asks that you contact him at rwmichelmore@ucdavis.edu.

To fight Fusarium, the Michelmore team developed 40 resistant breeding lines of lettuce, and made them available to seed breeding companies and others interested in breeding for resistance. If you are interested please request seeds from Michelmore at rwmichelmore@ucdavis.edu.

The bacteria causing corky root have caused problems especially in the Salinas Valley. The ‘Salinas’ variety of lettuce has a susceptibility gene that the ‘Greenlakes’ variety does not, Michelmore said. ”We characterized it genetically and are in the process of characterizing it at the molecular level,” Michelmore said.

Michelmore’s team also is looking at the genetic architecture of roots to understand why there are different responses in root growth to the stress of increasingly salty soil. “Roots are under-appreciated,” he commented.

Progress is continuing in the lab’s Lettuce Genome Sequencing Project. This large project is compiling genetic and genomic resources for cultivated lettuce and its relatives in a portal to give broad access to researchers. “Lettuce now has a very high-quality reference genome,” Michelmore said. “What we’re trying to achieve is, can we look at many of the genes available to breeders in this species rather than just one cultivar?... We’re getting there.”

Michelmore summarized his research at the recent meeting of the California Leafy Greens Research Board, of the state Department of Food and Agriculture, which contributes funding.