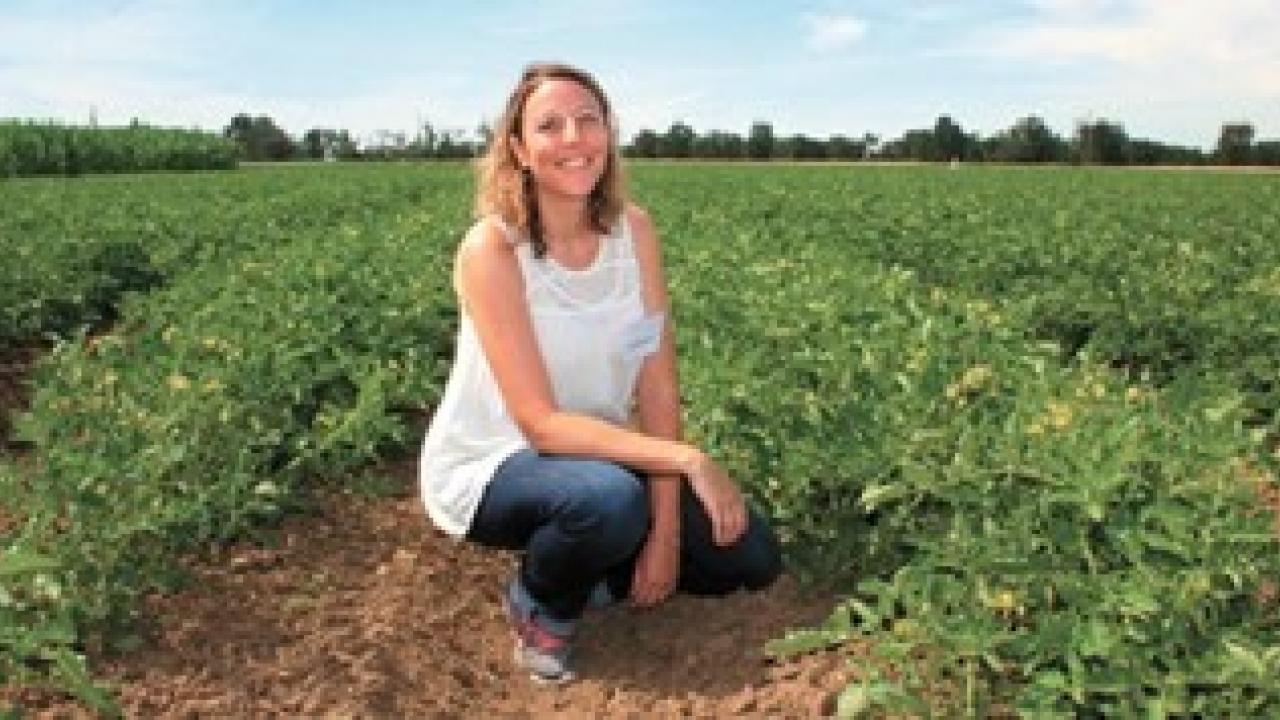 Subsurface drip has become an accepted, standard technology for processing tomatoes, but questions remain on how to schedule irrigation, adapt the system for organic production and make it work for rotation crops. 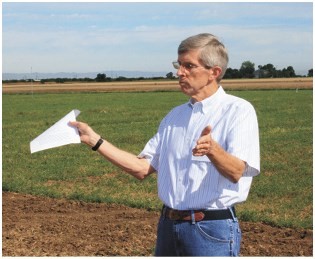 "To the degree we can increase the solids concentration, we reduce the cost of drying the crop down," said Tim Hartz, University of California Cooperative Extension vegetable crops specialist. "We also have to dry down the field to avoid compaction from harvest equipment."

Hartz discussed the latest research on managing deficit irrigation of tomatoes on subsurface drip with the growers and researchers who came to Russell Ranch outside Winters for an annual sustainable agriculture field day titled Farm Water Management in Times of Scarcity.

"Around 95 percent of tomatoes is water," Hartz said. "The last couple years, it cost $1,000 an acre-foot for water on the Westside. Two or three inches can be a lot of money."

As inviting as the extra cash can be, it is a mistake to begin cutting back on water too early in the season, he said.

"If the tomatoes are trying to set fruit, deficit irrigation will stop the plant from setting more," Hartz said. "You don't want to cut back on water while tomatoes are still setting fruit, which is usually about six weeks before harvest."

The right time to cut back on water is late enough to allow the plant to fully set fruit, but early enough to still have a significant amount of green fruit, he said.

"You don't increase solids of the red fruit, only of the green fruit," Hartz said. "If you manage correctly, you keep water out of the fruit, and the solids should remain the same. That's your goal."

Organic growers face additional challenges in managing drip because there must be water for all the microbials that build organic soil, and the crop must get nutrients from the entire soil profile, rather than through the drip line.

"It is difficult for organic growers because they need to use nutrients from the entire soil," said Amelie Gaudin, UC Davis assistant professor of plant sciences. "We have very little information about nitrification, and about the roots, where they are and how big they are."

Gaudin is researching the advantages and disadvantages of irrigating tomatoes using a single line of buried drip, a double line, or through the furrows. 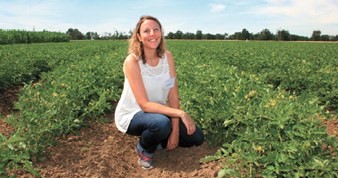 "There is not a clear, black-and-white answer," she said. "We're starting to see what some of the tradeoffs are."

Although the buried drip is a more efficient irrigation system, it may not bring water to the microbes that are essential to building organic soil.

"What happens to soil health in a micro-irrigation system?" Gaudin asked. "Imagine you're a microbe and you need water, but you're not getting it. It's a fine balance; there are a lot of tradeoffs. We did see some decreasing aggregation with drip, so there was a decline in soil quality. This might decrease the ability to sequester carbon over time."

Another challenge with buried drip on tomatoes is finding rotation crops that can be irrigated with the same spacing.

Results at Russell Ranch were promising with a tomato-corn rotation using the same buried drip lines and emitters.

"We got 12,500 pounds of corn with 22 and-a-half inches of water," said Mark Lundy, UCCE small grains and corn specialist. "With a flood system, you could easily use 30 inches. You can grow a lot of corn with less water on subsurface drip irrigation, and you can get nutrients to the crop when it needs them. This was using a tomato subsurface drip irrigation system to grow a rotation crop of corn. When you grow two crops, you use the spacing of the more valuable one." 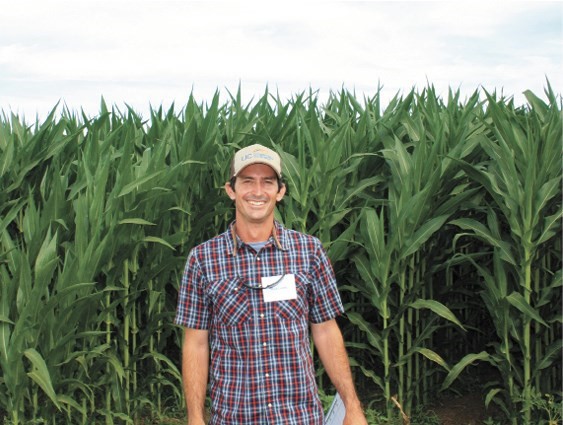 The trial was also a test of deficit irrigation strategies on corn, which is not always the most forgiving feed crop.

"With sorghum, you can cut your water back to 70 percent of the optimum and still get increased yield per gallon," Lundy said. "That's not true with corn. With corn, the cutoff is about 90 percent."

Not only does deficit irrigation on corn need to be relatively moderate, he said, it also needs to be done at the right time in the season.

"There is a terrible time to stress corn, and that's between the vegetative and reproductive stages," Lundy said. "That's tasseling and silking, and within about a week of that."

Other studies at Russell Ranch show that with both corn and tomatoes, the use of buried drip substantially reduces nitrous oxide emissions, a greenhouse gas under scrutiny by air quality regulators.

"In tomatoes, we've seen reductions of nitrous oxide emissions of 70 percent with subsurface drip," said Martin Burger, UC Davis assistant project scientist. "With corn, it is an 80 percent reduction. We've already reduced the emissions in conventional tomatoes by switching to subsurface drip irrigation. To reduce it further, we need to optimize the irrigation system, reduce the nitrous oxide emissions and replace some of the synthetic fertilizer with organic."

Burger is doing a long-term study of how different ways of growing tomatoes affects energy use, carbon sequestration and nitrous oxide emissions.